The other evening Bubba and I decided to make his dads favorite cookie Snickerdoodles as a surprise for him. Didn't take dad long to figure out we were up to something and came to see what we were doing in the kitchen. So all the pictures of the cookie making are thanks to dad for being curious.
I wanted to make a cookie with Bubba that would be easy enough for him to help with and gave him his own job as well; other then putting ingredients in the mixer. 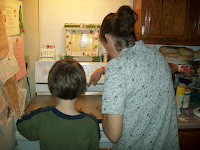 So we got started on our cookies and having fun with just talking and being silly in the kitchen. I have to admit one of my favorite times with my family is in the kitchen. So after a little being silly and working on getting the cookie dough together we got to Bubbas job. 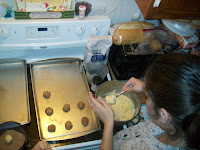 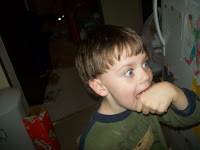 As you can tell Bubba was loving the taste of the cinnamon and sugar. ﻿So after a final hand washing and getting all the cookies ready to go in the oven we had the hard part of waiting for them to get done. Bubba sat in front of the oven for awhile watching the cookies bake and keep asking "are they done yet, I wanna eat one". So when they finally came out of the oven and cooled just enough to be eaten there were hands everywhere going after the warm cookies. If you'd like this finger licking cookie recipe it is located under my Recipes tab. 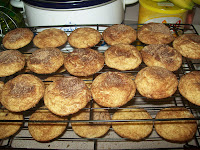