Bubba was given the opportunity to review Jumpatarts newest online game called Math Blaster. He was super excited as was I when we got the offer. He wanted to start
playing right away he loves any chance he gets to be on the computer. He is so much
like his dad when it comes to that. 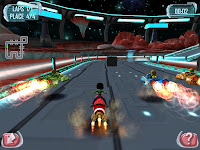 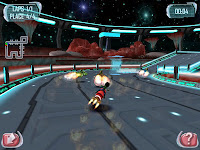 Math Blaster was launched in January 2011 and is a futuristic online adventure packed with wacky aliens, high-tech gadgets and, of course, math! This game is suited for
ages 6 and up. Though it is suited for 6 year olds if they are not real well with reading
it may be a little challenging without the parents help. We found that out with Bubba, because he is just learning to read he had a little bit of a challenge. But in my opinion no
6 year old should be on a computer without adult supervision at all times. That is one reason why Bubba got so excited that he got to do this review because now he had a way to get his dad and I to let him on the computer. 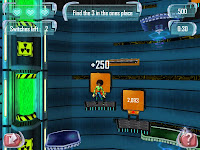 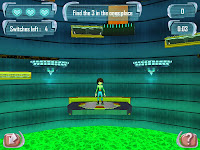 Bubba really enjoys playing the Math Blaster games. Though some are to hard for
him because he does not know all his math skills like multiplication and division we had
to make sure the games he was playing were at his level. He really enjoyed the Math Blaster HyperCycle and was pretty good at it. He also enjoyed the Galaxy Grand Prix.
We all had fun playing the games together. I would have to say my favorite was the HyperCycle as well. I really enjoyed seeing Bubba being challenged with addition and subtraction. I have also seen an improvement in these skills with him. 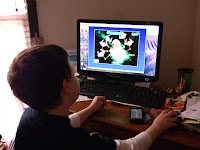 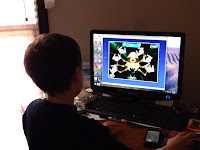 When I asked Bubba what he though of this game he said "It's really fun and I love beating the aliens." Though some of it was hard for him and it took him a little while to grasp the concept of using the mouse and keypad on the keyboard together. I think he did well with the game. I feel that this game would be more suited for 7 and up
because by first grade you can read on your own and do not need as much help with
the following of the directions. We will continue to play Math Blaster with Bubba
especially since we can see his math skills improving while playing the games and its so fun to see how excited he gets when he beats his own scores as he improves.

Who: This Giveaway is open to US & Canada

Rules: You must complete the mandatory entry for any extra entries to be considered valid.
Please provide your e-mail address on each comment.
The "+1 & +2" are how many entries you receive for completing that task.  If it says +2 you would be leaving two separate comments for that task.

This giveaway will end on May 12, 2011 at 10:00 pm EST.
Winner will be chosen randomly by Random.org. I will email the winner, and they have
48 hours to respond to my email with their mailing information. If there is no response within
48 hours, a new winner will be chosen.
“Disclosure: I was provided with a membership good for Math Blaster and Knowledge Adventure at
no cost by Knowledge Adventure in order to test the products’ abilities and give my own personal
opinions on it. The opinions I have given are mine and may differ from others but were not influenced
by the company or the free product provided.”

Posted by Trista Anderson at 10:07 PM

New comments are not allowed.