My family and I recently had the chance to go to Kalahari Resorts in Sandusky, Ohio before the weather turned too cold. When we got up the day of the trip it was a little rainy and cool so we were worried we wouldn't be able to enjoy any of the outdoor amenities. Luckily while driving there we drove out of the rain and it warmed up a little to be in the 70's but in the sun it felt nice still nice enough to be in the water outside. 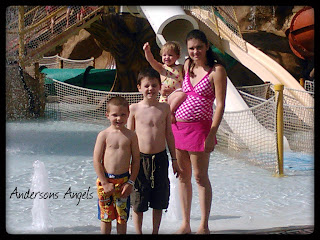 We had so much fun playing in the outdoor pool areas and since it was in the 70's most people were inside. I liked that there was always more than one lifeguard at the pools. The lifeguards also walk around with a big measuring stick and if the children are under a certain height they have to have a life jacket on to be in the water, even if the water is only ankle deep. But one nice thing is they provide life jackets there free to use and they have just about every size you could need for the children. 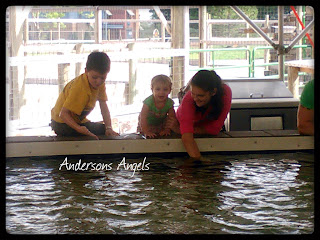 While we were at Kalahari we got to enjoy their animal park as well. The kids and I really enjoy the Sting Ray touch tank. Sweet Pea wanted to try and touch them too but her little arms were just not long enough. We had so much fun going through the animal park and seeing the animals. I would have to say that the highlight of the animal park was watching Bubba get drooled on by a giraffe. 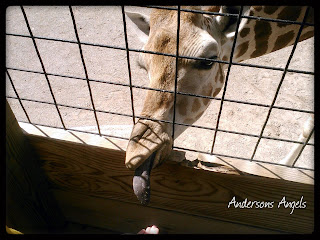 After we visited all the animals and swam for a bit outside we headed to the indoor pools. It was very crowded inside which was to be expected since it wasn't super warm outside. We headed toward the wave pool because that's where everyone wanted to go. While heading there we found a really nice kids area right by the wave pool so we decided to let Sweet Pea and Pumpkin play there for a bit while Bubba and I went to ride some of the rides. Well I thought Bubba and I were going to ride some rides but he backed out everytime so we headed back to the kids play area. 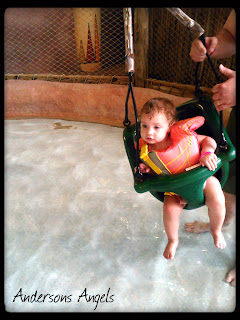 Sweet Pea was enjoying swinging in the water and her daddying pushing her. She didn't want to get out of the swings. I really liked that the swings were at different heights so the little ones could have their toes in the water and not drag their feet while swinging. Pumpkin was off playing in some of the slides and play areas they had in the Kids Play area. He really enjoyed the one that looked like a truck and you could climb through the wheels. 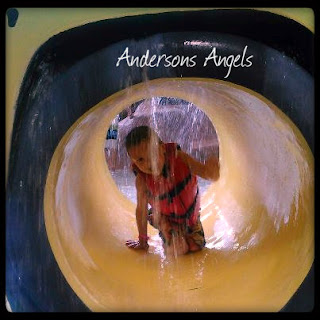 After playing in the Kid's area for a bit we headed to the wave pool. By this time Sweet Pea was getting very tired because she hadn't had a nap all day. Jake took the boys out into the wave pool so they could play in the inter-tubs and water. Sweet Pea and I sat up at the edge of the wave pool where the waves were coming in and it rocked her in and out of sleep. Just about everytime she would fall asleep she would wake herself up because she wanted to play in the water it was way too cute!


I would recommend Kalahari as a great getaway for a family year round! They have so much to do there and offer families a wide variety of choices for entertainment to keep the whole family busy all day!!

Posted by Trista Anderson at 10:35 PM