The Stork - A at Home Fertility Option

Over the past year I am sure that many of you realized that my husband and I struggled with trying to get pregnant. Which I felt alone and ashamed of because I couldn't easily conceive when others just think about it and it happens. I recently sat through a webinar hosted by Stephen Bollinger, founder, president and CEO of Rinovum, about a new product they have coming out to help couples with trying to conceive. While sitting through the seminar I discovered that I was not alone in my struggle and there were others just like me out there.


Did you know that approximately 7.3 million couples (1 in 6 couples) in the United States alone have difficulty conceiving! With that said I would like to introduce to you a company called Rinovum which is the creator of The Stork a product I am gonna talk to you about.

Rinovum is a Pittsburgh, PA based, privately held women's company that is dedicated to bringing products into the market that will enhance women's lives and empower them to take charge of their health. Their first focus is an EX device - The Stork, which is driving towards a direct to consumer device, for reproductive health to aid in natural fertility and conception in the privacy of the patients' home. 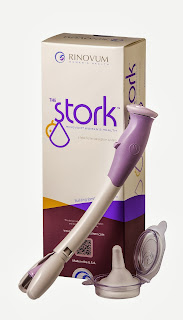 Rinovum, formerly Intimate Bridge 2 Conception, believes that moving out of the doctor's office and into the home will help couples better achieve their reproductive goals. "One of the biggest challenges with physician office assisted approaches (intraurterine insemination or IUI) is the loss of privacy, where the male has to perform in the doctor's office," explains Bollinger. "A third of all candidates can't and the couple go home frustrated. Our technology allows the couples to have supported conception while delivering a higher concentration to the cervix in the privacy of their own home."

The Stork is targeting the 7.3 million couples in the U.S. who experience difficulty in conceiving. It is specifically created to bridge the gap between natural intercourse and more aggressive approaches like IUI and Invitro fertilization. This is defiantly something I would have looked into while trying to conceive had it been available at the time.

The Stork should be a couples first step in the path of assisted conception, says Bollinger. A way to "nudge the Stork." It works through a condom-like vessel for the collection of fresh semen, which is then placed into a tampon-like device and delivered into the vaginal tract to the cervix. 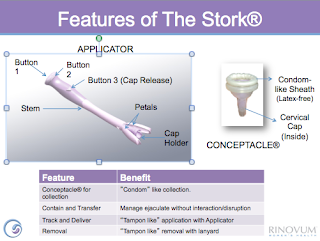 While fertility is Rinovum's primary focus, the company plans to expand into other areas of women's health care, Bollinger says. "Women are smart consumers," he says. "We're taking a look at technology that is proven and clinical based benefit that can be offered over-the-counter or be more consumer friendly. That's what Rinovum is all about."

I hope that this information has been helpful to you if you are trying to conceive. If you are interested in using The Stork then make sure you stop by Rinovum's website to learn more about how to purchase this product.

Posted by Trista Anderson at 10:32 PM