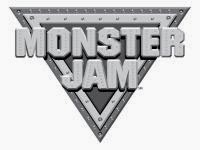 This year our family is looking forward to Valentine’s Day and it’s not because of flowers or chocolates. Though my boys will never turn away chocolates nor would I flowers. Instead we are excited because we will be going to see Monster Jam when it comes to Cleveland, Ohio! The monster trucks are taking over the town Friday, February 14th through Sunday, February 16th 2014.

The premier monster truck series, Monster Jam attracts more than four million fans annually at arenas and stadiums throughout the world. Monster Jam events showcase freestyle and racing competition among custom-designed machines that average 12 feet tall by 12 feet wide, sit atop 66-inch-tall tires and weigh a MINIMUM of 10,000 pounds. Built for short, high-powered bursts of speed, monster trucks generate 1,500 to 2,000 horsepower and are capable of speeds of up to 100 miles per hour. Monster trucks can fly up to 125 to 130 feet (a distance greater than 14 cars side-by-side) and up to 35 feet in the air.
Sounds awesome, right?? 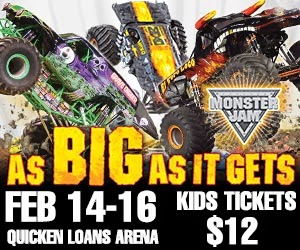 We took the boys last year and they LOVED it! I also remember it gets really loud so I will be making sure to bring some ear protection. Monster Jam is sanctioned by the United States Hot Rod Association®. Monster Jam trucks slated to appear at Quicken Loans Arena in 2014 include Grave Digger{Bubba's Fav}, Man of Steel, Spike, Mega Bite, and more!

Interested in attending the Cleveland, OH show? Then here are all the details!

Ticket prices start at $12 (opening night) but increase by $3 the day of the show so be sure to get your tickets early! Use the promotional code MOM25 to receive 25% off. Please note this offer is NOT valid on Opening Night, Gold Circle or VIP seating. No Double Discounts!

Feld Motor Sports and Monster Jam are proud to dedicate their opening night performance in Cleveland to those who have served, or are still serving in the United States Armed Forces. Throughout Military Appreciation Night, Monster Jam will salute the men and women of the military for their dedication and the sacrifices they have made to serve our country.
Additionally, active duty and veteran military members can receive one FREE ticket to opening night. Tickets can be picked up at the Quicken Loans Arena box office with a valid military ID, between Monday, January 27th through Friday, January 31st.

Party in the Pits
A sold-out event year after year, Monster Jam’s Party in the Pits runs from 10:30 a.m. to 12:00 p.m. on Saturday, February 15th and Sunday February 16th, prior to the 2:00 p.m. show. The pre-show pit party gives fans (with a pit pass and show ticket) the chance to see these larger-than-life monster trucks up close, meet the drivers behind the wheel, take pictures and get autographs! Pit passes will be available for $10 online at theQarena.com after tickets have been purchased and at the Quicken Loans Arena box office, while supplies last.

Plus I have an amazing giveaway that will go to one lucky reader.
One lucky reader is going to win a family 4 pack of tickets to opening night (2/14 at 7:30pm)!!! 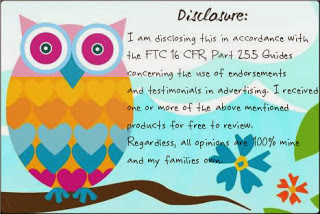 Posted by Trista Anderson at 4:14 PM