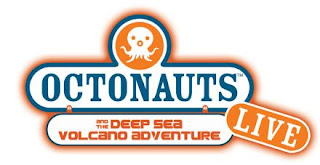 Explore, Rescue, Protect! The Octonauts' first ever, action-packed, interactive theatre show to tour the U.S. will head coast-to-coast visiting more than 60 cities including Akron, Ohio! The Octonauts and the Deep Sea Volcano Adventure will invite audiences on an exciting underwater quest through a world full of adventure and surprises and will feature brand new and fan favorite songs led by the entire Octonauts eight-member crew including Captain Barnacles, Lieutenant Kwazii and Medic Peso. This high-tech production will feature costume characters, animated projections on a huge screen and a brand new storyline and script.


Tickets are on sale now! VIP packages are available through CID entertainment and include a meet and greet with the characters and premium seating. For more information, visit www.octonautsliveus.com.

"The live show will bring these characters to life in a way children never thought possible, stretching their imagination and bringing them directly into their favorite character's world for the day, " says Jonathan Shank, executive producer at Red Light Management.

The tour comes on the heels of the new Octonauts episodes premiering throughout the year on Disney Channel and Disney Junior and the first ever Octonauts 4D movie adventure coming later this year.

The tour is produced by Red Light Management & Fiery Light, in association with Silvergate Media.

You can find all the tour dates HERE to see if the show is coming to a town near you! If you live in Northeast Ohio then you won't want to miss this show when it comes to the Akron Civic Theatre on October 30th!

I am Giving Away a 4 Pack of VIP Tickets to the Show at the AKRON CIVIC THEATRE!!

To enter simply fill out the form below and GOOD LUCK!!

Posted by Trista Anderson at 9:11 PM