Can Common Pain Relievers Do More Harm Than Good?

When it comes to relieving the common headache or body aches, it seems as if the cure may be
worse for you than the pain it's supposed to relieve.

Consumption of NSAIDs - common pain relievers like ibuprofen (Advil, Motrin) and acetaminophen (Excedrin) - has grown to 70 million prescriptions and 30 billion over-the-counter sales annually. That statistic is disturbing to Michael Sheehan, founder of natural medications company
BioResource Inc., because of a study from the Archive of Internal Medicine (AIM) that reveals NSAIDS may play a part in the development of heart disease.

"The risks of NSAIDs are a growing concern," said Sheehan. "The fact that they may contribute to
heart problems is a wake-up call the public needs to take seriously." 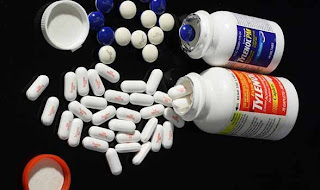 According to the American Heart Association, about 785,000 Americans suffer a first heart attack each year, and another 470,000 who have already had one or more heart attacks experience
another episode. The AHA also revealed that in 2010, heart disease cost the United States $316.4 billion. This total includes the cost of healthcare services, medications, and lost productivity.

The AIM study found that heart failure patients who used NSAIDs may be at an increased risk for
side effects and other dangers. The article concluded that NSAIDs "are harmful to heart-failure patients," reporting that individuals who received the medications were subject to "dose-related increases in risk of death and re-hospitalization for heart failure."

Research also showed that, with prolonged use, NSAIDs can cause potential side effects that include:

"The nature of these recent revelations, combined with the pervasive use of NSAIDs, should make people stand up and notice," added Sheehan. "There are good signs, however, that more Americans
are seeking natural options to pain pills. A recent National Institutes of Health study revealed that
the number of men seeking information on alternatives to traditional pharmaceuticals and
treatments rose by 18 percent between 2002 and 2007. This trend indicates Americans are getting smarter about taking responsibility for their personal health. The truth is there are dozens of natural substitutes for NSAIDs, and many of these remedies lack the potentially harmful side effects and risks associated with NSAIDs. With new, safer choices available, perhaps the need to use NSAIDs will diminish in the future.”
Posted by Trista Anderson at 3:43 PM