Kaijudo is a new TV show for kids ages 8 and up on the Hub. Bubba my 8-year-old  and Pumpkin my almost 5-year-old love watching Kaijudo.
Kaijudo is a story about "Ray, a 14-year-old who lives with his mom and granddad, has been recruited by the Duel Masters to study Kaijudo: The Way of the Creature. They chose Ray for his natural talent as a creature tamer and duelist. Along with pals Allie and Gabe, Ray learns to work with the magical creatures ... in their world. Each duel he fights yields new experience and allies in both worlds. The Veil, which has divided the two worlds for a thousand years, is crumbling. Hope lies with those who can master the art of Kaijudo." 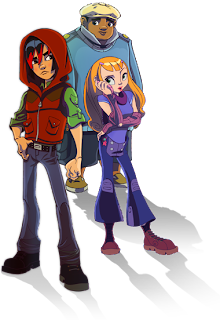 Bubba and I had planned on having a few boys over to watch 2 episodes of Kaijudo to review, but when it came the day of the party Bubba ended up very sick. He ended up running a 100+ temperature for almost a week straight. So the party never got to happen. So Bubba and Pumpkin got to review the show by themselves.

Here were their responses:
Bubba: I love Kaijudo because the story is very intriguing and I like all the strange and awesome creatures! I also love the dueling in the show and the karate in it.
Pumpkin: I like it because it has to do with karate and the creatures look really awesome!
Me: I found this show to be very enjoyable to watch with the kids and it is good at keep your attention. 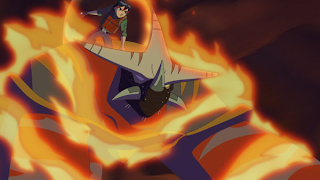 My boys did not know about Kaijudo before we did this review. Now they try to make sure to watch it live each week or have their uncle Jesse record it for them.
You can catch Kaijudo, Rise of the Duel Masters on the Hub on Saturdays at 8:00 pm ET.