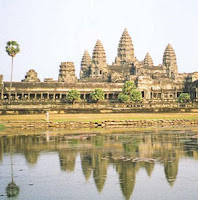 When most people think of a trip to Cambodia, they think of a beautiful tropical landscape with verdant rice paddies and ancient Buddhist temples. But Cambodia also has a startlingly dark past. Underneath the sparkling green jungle and behind the tourist attractions of Angkor Wat and the Bokor National Park, Cambodia bore witness to a deeply violent event. From 1970 until the early 1990s, the Khmer Rouge army, under the orders of dictator Pol Pot, plunged the country into a catastrophic civil war that left more than 2 million civilians dead, as well as famine and destruction of nearly all the country’s industry.
Many of the victims of the Khmer Rouge were buried in shallow, mass graves. These sites have been turned into memorials for the victims, and are now known as the Killing Fields. They are open to the public and serve as valuable ways to remember the past.
Read more »
Posted by Trista Anderson at 11:23 AM 1 comment:

Posted by Trista Anderson at 12:01 PM No comments:

Posted by Trista Anderson at 11:20 AM No comments: