Treat Your Family to Imagine Soups

I live with very picky eaters. My oldest doesn't like what the middle boy eats and the baby doesn't like it if its not eggs or chicken. I received the Imagine soups and knew this was going to be something that I ate by myself. I was not upset about that though. I just love soups. They are easy and usually last a day or two. The bad part about soups most of the time though, is the fat, calories and stuff they add that is not healthy or needed in a soup, in my opinion. When I got the Imagine Soups the first thing I noticed immediately was that they say Organic on a few of them. The next thing was I flipped them over and seen on the back of them it states *NON-GMO ingredients, non dairy, no added MSG, no artificial ingredients or preservatives. Some of them are also gluten free so there is a soup for everyone. The first one I tried was the organic vegetable broth. I ended up putting it in vegetable soup and it was so yummy. It is pre-seasoned which was so helpful to me because I usually end up forgetting the seasoning till its done and I eat it. I used the organic chicken broth in chicken and dumplings. I saved some of the broth and used it in mashed potatoes too and it made it so creamy and flavorful. 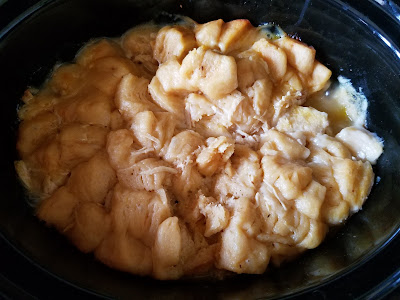 Some of the other soups I had, I wasnt sure what to make with them. I looked up recipes and I found an enchilada recipe to use the Imagine Heirloom Jacob's Cattle Beans with Roasted Peppers soup. We have Taco Tuesdays and my middle son and husband love the taco sauce on their tacos. I told Monkey that this was a new kind of taco sauce and he loved it. It went well with them. The Imagine Heirloom Beauregard Sweet Potato with Ancho Chili soup is made with real sweet potatoes and was great on meatball sub night. Some of the boys liked it but I thought it was good. I love sweet potatoes and ended up pouring it on my french fries also which gave it a sweet flavor. 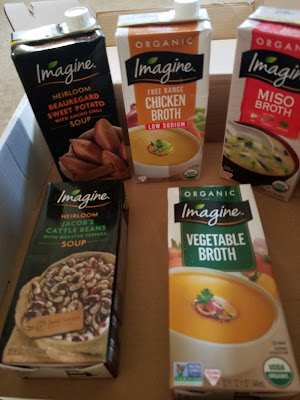 With the Imagine soups being healthier and gluten free (some of them) and vegan (some of them), these would be a great thing to keep on hand. They are a good to just grab and mix with rice, potatoes, meats, you name it I'm sure you can find something to mix the soups with. They come in soups, broths, chunky style soups, gravies, and culinary simmer sauces. They are available online at www.amazon.com, also in some of your local grocery stores. Pick up a few soups today and let your imagination go and see what recipes you can come up with.

Posted by Stephanie Millican at 9:10 PM